He who holds the heavens and the earth 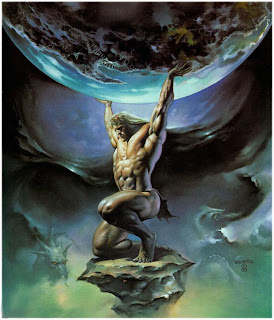 gentle were the eyes of the god,
who stood amongst the misty stars,
and cowered behind the shadow of the world,
in the melting darkness that swiftly drew,
the vanishing canopy of the single sight he knew.
slight desires of hunger and thirst,
the mighty titan does bellow his worst,
in the thunder falling like the rock of mountains,
and the shivering sky in him do we see,
atlas,the fallen and the ever rising,
caught in the middle of high ambition,
and trespassing on the road to redemption or mercy,
and atlas,the reliever of burdens,
though the burden he carries himself,
like the hidden angel of man's timely errors,
for brothers deceive what the cold eyes should reveal,
and kronos and gaia,were they ever immortal,
and join their brother and banished comrade,
for journeys unfold in the waiting universe,
and time will be theirs forever again.
Posted by Fallen Castle at 6:29 AM